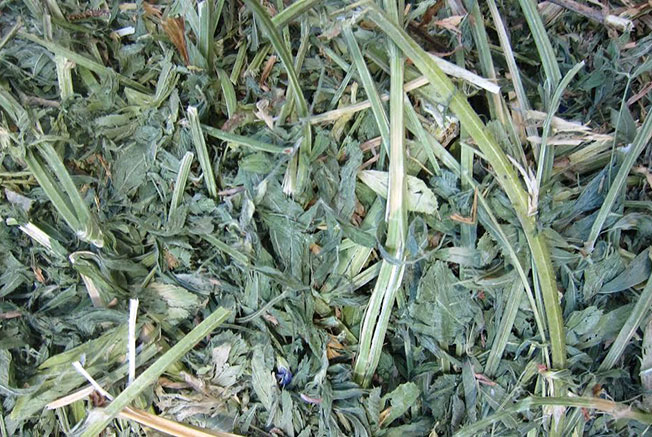 Introduction
Alfalfa (Medicago sativa L.), also called lucerne, originated near Iran, but related forms and species are found as wild plants scattered over central Asia and inte as fo Siberia. Its valueed for horses and other animals was described as early as 490 B.C. by Roman writers. Alfalfa was first introduced into the eastern US by the colonists in 1736.

Called the “Queen of Forages”, alfalfa is not only the oldest cultivated forage crop in the US, but it is one of the most palatable and nutritious. Alfalfa is rich in protein, vitamins, and minerals. And, when cut prior to bloom, it is low in fiber and high in energy. Thus, it is prized as a primary component in dairy cattle rations and is an important feed for horses, beef cattle, sheep, and milking goats.

Alfalfa has a very high yield potential compared with that of other forage crops. It also is an integral component of many crop rotations because of its ability to fix nitrogen, improve soil structure and tilth, and control weeds in subsequent crops.

Area of Adaptation
Alfalfa is worldwide in its distribution (world crop and statistical table link) and is grown in many areas of the US, accounting for nearly 30 million acres (12 million ha) of production. A wide range of soil and climatic conditions are suitable for alfalfa, but for best production it requires a well-drained soil with nearly neutral pH and good fertility.
Alfalfa should not be expected to do well in poorly drained or acid soil or in areas where adequate water is not available.

Primary Use
Alfalfa is used primarily as a hay crop. It has the highest feeding value (section link) of all commonly grown hay crops when harvested at late bud or early flower stage of maturity (table link). Alfalfa produces the greatest amount of protein per acre of any livestock feed. It is often used in combination with corn silage in livestock rations to take advantage of the protein and energy content of the two feeds. Alfalfa also can be made into silage, pellets, meal, or cubes. With careful management, alfalfa can be used successfully as a pasture crop